Benzene is an organic chemical compound with the molecular formula C6H6. It’s molecule is composed of six carbon atoms joined in a planar ring with one hydrogen atom attached to each. As it contains only carbon and hydrogen atoms, benzene is classed as a hydrocarbon. 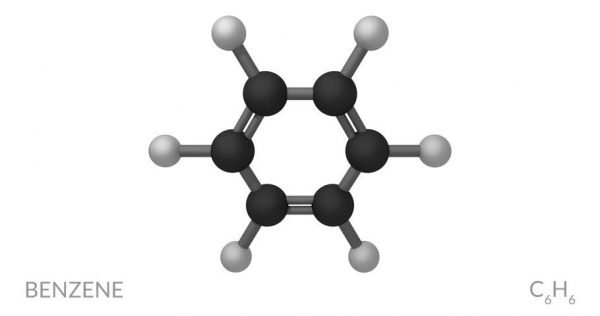 The word “Benzene”  is derived from “Gum Benzoin” (Benzoin Resin), an aromatic resin known to European pharmacists and perfumers since the 16th century as a product of South East Asia. An acidic material was derived from Benzoin by sublimation, and named “Flowers of Benzoin”, or Benzoic Acid. The hydrocarbon derived from benzoic acid thus acquired the name “Benzin”, “Benzol”, or “Benzene”. In 1836, the French chemist Auguste Laurent named the substance “phène”; this word has become the root of the English word “Phenol”, which is hydroxylated benzene, and “Phenyl”, the radical formed by abstraction of a hydrogen atom (free radical H•) from benzene.

It’s the natural constituent of crude oil and is one of the elementary petrochemicals. Due to the cyclic continuous pi bonds between the carbon atoms, benzene is classed as an aromatic hydrocarbon, the second [n] – annulene – annulene). It is sometimes abbreviated PhH. Benzene is a colorless and highly flammable liquid with a sweet smell, and is responsible for the aroma around petrol (gasoline) stations. It is used primarily as a precursor to the manufacture of chemicals with more complex structure, such as Ethylbenzene and Cumene, of which billions of kilograms are produced annually. As it has a high octane number, aromatic derivatives like Toluene and Xylene typically comprise up to 25% of gasoline (Petrol). Benzene itself has been limited to less than 1% in gasoline because it is a known human carcinogen. Most non–industrial applications have been limited as well for the same reason.

Benzene is used mainly as an intermediate to make other chemicals, above all Ethylbenzene, Cumene, Cyclohexane, Nitrobenzene, and Alkylbenzene. More than half of the entire production is processed into Ethylbenzene, a precursor to Styrene, which is used to make polymers and plastics like polystyrene and EPS. Some 20% of the benzene production is used to manufacture cumene, which is needed to produce Phenol and Acetone for resins and adhesives. Cyclohexane consumes around 10% of the world’s benzene production; it is primarily used in the manufacture of nylon fibers, which are processed into textiles and engineering plastics. Smaller amounts of benzene are used to make some types of rubbers, lubricants, dyes, detergents, drugs, explosives and pesticides. In 2013, the biggest consumer of benzene was from China followed by the USA. It’s  production is currently expanding in the Middle East and in Africa, whereas production capacities in Western Europe and North America are stagnating.

Toluene is now often used as a substitute for benzene; for instance as a fuel additive. The solvent–properties of the two are similar, but Toluene is less toxic and has a wider liquid range. Toluene is also processed into benzene.

An Octane Rating, or Octane Number is a standard measure of the performance of an engine or aviation gasoline. In the United States, octane ratings in unleaded fuels vary between 85 and 87 AKI (91–92 RON) for regular, 89–90 AKI (94–95 RON) for mid–grade (equivalent to European regular), up to 90–94 AKI (95–99 RON) for premium (European premium).The higher the octane number, the more compression the fuel can withstand before detonating. In broad terms, fuels with a higher octane rating are used in high–performance gasoline engines that require higher compression ratios. In contrast, fuels with lower octane numbers (but higher Cetane numbers) are ideal for diesel engines, because diesel engines (also referred to as compression–ignition engines) do not compress the fuel, but rather compress only air and then inject fuel into the air which was heated by compression. Gasoline engines rely on ignition of air and fuel compressed together as a mixture, which is ignited near the end of the compression stroke using electrically activated spark plugs. Therefore, high compressibility of the fuel matters mainly for gasoline engines. Use of gasoline with lower octane numbers may lead to the problem of engine knocking.